Song of the Humpbacks 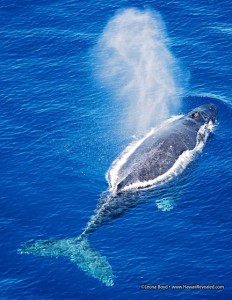 A humpback relaxes in the warm waters of Hawai‘i.

Hawai‘i is paradise for more than just people. Migrating animals come here by air and sea to escape the cold winter weather. Humpback whales arrive every winter to the delight of pretty much everyone. Maui and its shallow channels between the offshore islands get the most action. After fattening up in their feeding grounds in the northern Pacific Ocean, female whales come to give birth to their calves while the males do what many single males do in the tropics: they come looking for love.

Male humpback whales are the showmen of the whale world, sometimes leaping (breaching) fully out of the water and slapping their fins in astonishing, acrobatic displays. As impressive as these feats are, one of the most striking behaviors is how the whales sing. Anyone who takes a dip underwater at any of Maui’s south beaches during the peak whale season (January and February) will hear get an earful of the groans, moans, clicks and whistles of the male humpbacks vying for the favor of an available lady whale. Sound travels far underwater and these whales can project their songs about 20 miles away! 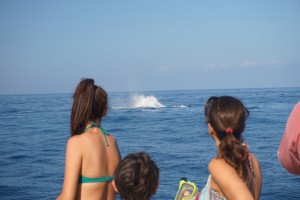 Visitors watch in awe as a humpback surfaces besides them

It is only the male humpbacks that sing and they all sing the same tune.  Interestingly, all whales in a region sing the same song—North Pacific humpbacks all sing one song, North Atlantic humpbacks sing another.  The songs can last 10 to 20 minutes and will be repeated for hours at a time (“Second verse, same as the first!”). It is a strange, beautiful, mysterious and downright loud experience hearing the whales, a phenomenon known locally as “whale soup”. It is really cool to then see a whale breaching just a few hundred yards offshore after hearing its Bing Crosby impression.

If you’re lucky enough to visit Maui during whale watching season, do yourself a favor and take a swim. You’ll likely have a whale song stuck in your head for weeks after. Andrew Doughty is the famous author of the widely popular Hawaii Revealed series including Kauai Revealed, Oahu Revealed, Maui Revealed and the Big Island Revealed. He moved to Kauai many years ago after he fell in love with the beauty of the islands and decided to never go back. He is known for his candid opinion on each of Hawaii’s attractions, be it a restaurant, a helicopter ride, a beach or a resort. For the last two decades, he has managed to keep his identity anonymous so that his reviews can remain unbiased and only be influenced by his own opinions and thoughts. You can learn more about his beautiful journey at this link – About the author