Andrew Doughty2020-09-24T09:30:37-10:00
On November 30st, 1935 a massive earthquake rocked the Big Island of Hawai‘i. It was said to be strong enough that is was felt on O‘ahu (we have no way to verify that,) but what we can say for sure, is this was the beginning of an eruption of Mauna Loa on the Big Island of Hawai‘i, and would eventually threaten to consume the town of Hilo. Pele is said to be the goddess who resides in the volcano and there are many stories and myths throughout ancient Hawai‘i regarding her fiery nature. She was respected and feared by the ancients, and remains so to this day by many. To interfere with her intentions is considered kapu (forbidden,) and disrespectful. So what follows was, and still is looked upon with contempt by a great deal of native Hawaiians and others who continue to pay homage to Pele. We do not advocate what was done, and some say go so far as to say there is a curse attached to the events we will describe, more on that later. 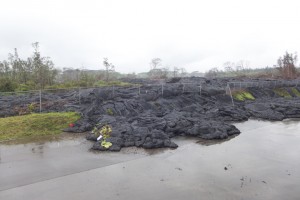 Lava starts to cross the road close to Pahoa

In 1935 the founder and director of the Hawaiian Volcano Observatory was an American named Thomas Augustus Jagger. Dr. Jagger concocted a plan to use explosives in order to collapse the lava tubes feeding the flow that was heading towards Hilo at a rate of around 1 mile per day. The estimates on the rate of speed of the flow vary depending on which source referenced, but all agree, it was moving extremely fast and if something wasn’t done, Hilo would be destroyed. Dr. Jagger’s plan called for the use of mule teams to transport TNT to strategic points of the tube system and detonate their payloads, hopefully collapsing the tubes and diverting the flow away from Hilo.  The only problem was time. It would take much too long to make the journey up the flank of Mauna Loa. A fellow volcanologist by the name of Guido Giacometti suggested the use of aerial bombs. The decision was made, and the call was put out to the 23rd bomb squadron of the U.S. Army Air Corp and on December 26, 1935, six Keystone series bombers and four LB-6 bombers were dispatched from Luke airfield in Pearl Harbor, each carrying 2 bombs containing 600 lbs of TNT. The following morning, a total of twenty bombs were dropped strategically around the flow. A week later the flow stalled. 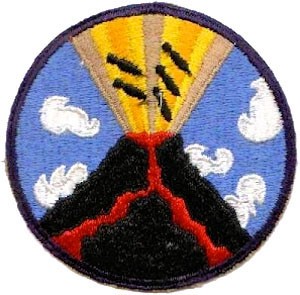 Dr. Jagger took full credit, and was quoted saying, “The smashing of the tunnel had cooled the oncoming liquid so that it dammed itself.  This confirmed the theory that the bombing solidified the tunnel lava back into the heart of the mountain.  With twelve river hits out of sixteen, and liquid thrown up hundreds of feet, there can be no question whatever that the bombing stopped the flow.” The 23rd bomb squadron patch even depicts an erupting volcano with aerial bombs falling towards the caldera. To this day the 23rd bomb squadron still officially claims credit for saving Hilo. However, modern volcanologists disagree. With the understanding we now have of the behavior of lava, diverting the flow with those puny 600 lb. bombs would be the equivalent of tossing a couple boulders into the Mississippi river and claiming you altered the flow. In other words, the whole thing was a coincidence. The bombs had no effect, and Hilo would have been spared either way. Remember the curse we mentioned? Well, two of the bombers crashed while landing at Luke airfield immediately following the mission, and some said it was Pele’s revenge for attempting to mess around with her plans. We thought this was an interesting story, as well as a lesson learned. Especially with Madame Pele knocking on the door of Pahoa town. Sometimes nature has plans that we cannot change. The best we can do is sit back in awe of her power, watch, and hope for the best 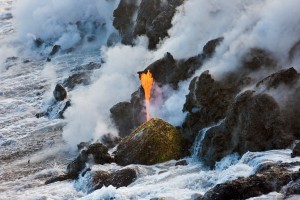 Lava flows into the sea on the Big Island