THE NORTH SHORE OF KAUA‘I

Want more tips? We have guide books and apps for Oahu, Maui, Kauai and the Big Island.

Find out where to get the best mai tais, which hikes are must-dos and so so much more.

No trip to the Garden Isle of Kaua‘i is complete without spending some time exploring its north shore. Though each island has its own north shore vibe of lush vegetation, quiet surfing towns and all-around beauty, Kaua‘i just feels like it captures these things in a way the other islands don’t. This is a place where you can go from world class accommodations and golf courses to one of the top hiking destinations in the country…all in the span of a few miles. Between the two is the community of Hanalei which checks pretty much every box on the “idyllic Hawaiian surf town” list. There’s only one road in and out of the area, so we’ll describe things the way you encounter them on the drive across the north shore. 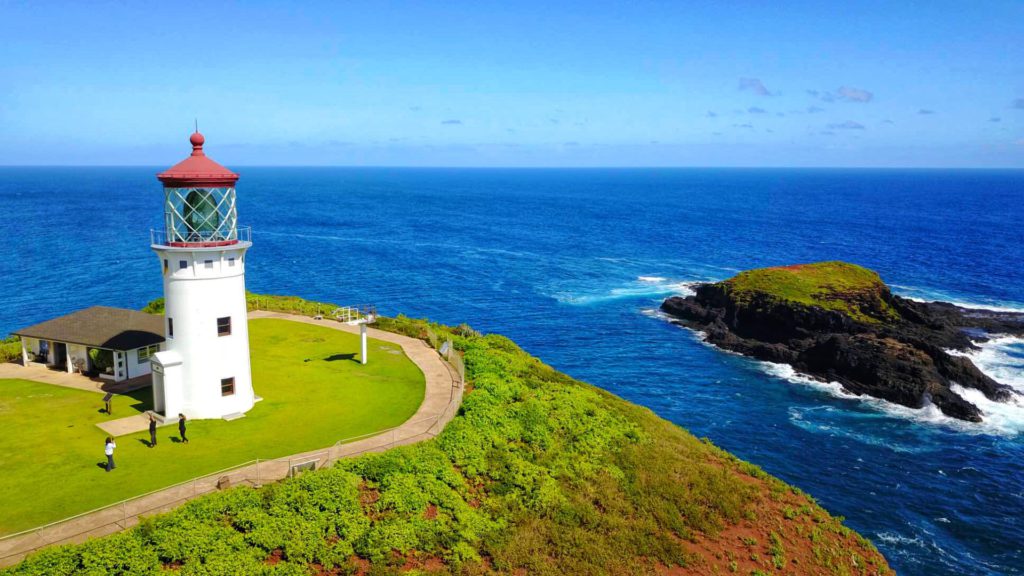 The former plantation town of Kilauea is the first place you’ll encounter if you were to reach the north shore—though there’s relatively few places to reach the shore in this area. It is known for the Kilauea Lighthouse. This is a postcard-perfect landmark perched on a bluff and represents the northernmost point of the main Hawaiian Islands. When the lighthouse was built in 1913, it had the largest clamshell lens in existence and was used until the mid ’70s when it was replaced by a beacon. These days it’s a wildlife refuge where numerous endangered seabirds nest every year. If you visit in the late summer, you may even come across some of the chicks as they explore their surroundings.

The lighthouse is the main draw here—there’s no hotels and the dining and shopping options are scant. The best place to find a bite to eat and unique shops is at the Kong Lung Historic Market Center. This collection of historic buildings served as the hub of the plantation’s company town from the late 1800s through the 1970s. Wandering through the small shops and narrow, central plaza, it’s easy to see how close the community must have been—the center served as a general store, butcher shop, barber shop, post office and diner. Now you’re likely to find high-end housewares, clothing shops and some quality eateries. 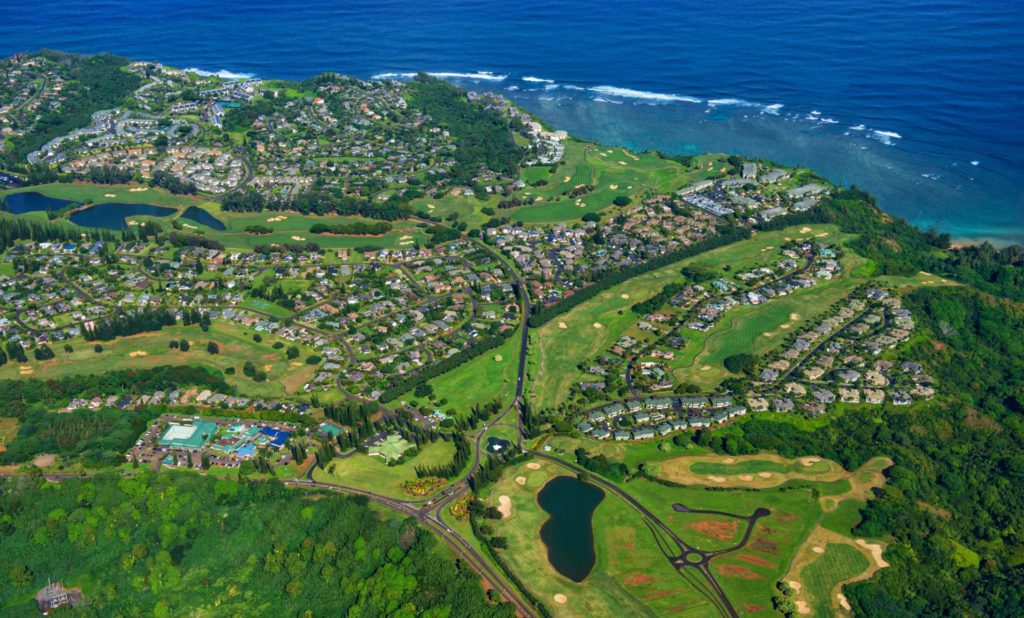 The next community you’ll come to is the resort area of Princeville. It was named after Prince Albert, the visiting 2-year-old son of King Kamehameha IV. Although the young lad died two years later, the name stuck. If you’re looking for a place to stay with killer views, the area is renowned for its ocean bluff condominiums.

Princeville’s cliffs lead many to think that it has no beaches to offer. Au contraire. Beaches don’t get much better than Hideaways, a very pleasant little pocket of coarse sand. The catch is that you need to hike down about 5–10 minutes to it.

Also located in the area is Queen’s Bath, a natural pool located on a lava bench. Queen’s Bath is actually a large pool the size of several swimming pools carved by nature into a lava shelf with an inlet from the ocean for fresh seawater to flow. During high surf, it’s extremely dangerous as the water flows in and out of the pond. Queen’s Bath has claimed numerous lives because people got nailed by large waves during times that they should not have gone. During winter months (generally October–April), high surf assaults the area, and you should always stay away. Even when the ocean appears calm, it’s always possible for a rogue wave to snap at this part of the shoreline, knocking people around, maybe even dragging them back into the open ocean. Some people think we shouldn’t even mention this attraction. But this is the information age—you’re gonna hear about it—and we’d rather you know about the safety issues than leave you with no information at all. And it can be safe, but only during calm seas. Again we really want you to understand just how potentially dangerous this can be during the winter. From September to April this area should be avoided.

As you leave Princeville, across the street from the last place to get gas on the north shore is the Hanalei Lookout. Many postcards have been sold featuring this view though sometimes vegetation blocks the scene. This valley is where most of the taro in Hawai‘i is grown. Taro corm (the root portion) is pounded to make poi. This is the stuff everyone told you not to eat when you came to Hawai‘i. If you go to a lu‘au, try it anyway. Then you can badmouth it with authority.

Hanalei itself is pretty small. As you enter town, passing over the Hanalei River, you’re greeted by several small shops and restaurants, eventually reaching larger shopping centers on both sides of the road. Restaurants, boutiques and surf shops fill both Ching Young Village and Hanalei Center, historic centers which started as a general store/rice mill and a school, respectfully. As charming as these buildings are, the real beauty is found at the bay itself. The Hanalei Pier is one of our favorite spots, especially at sunset.

The area around Hanalei Bay (meaning wreath-shaped or crescent-shaped) is a pretty little community. The surfing here is famous throughout the islands for its challenging nature during the winter. The entire bay is ringed by beach. A wide assortment of people live in Hanalei, including longtime locals, itinerant surfers, new age types, celebrities and every other type of individual you can imagine. You’re as likely to see locals driving a Mercedes or Hummer as you are a car held together with bungee cords and duct tape. 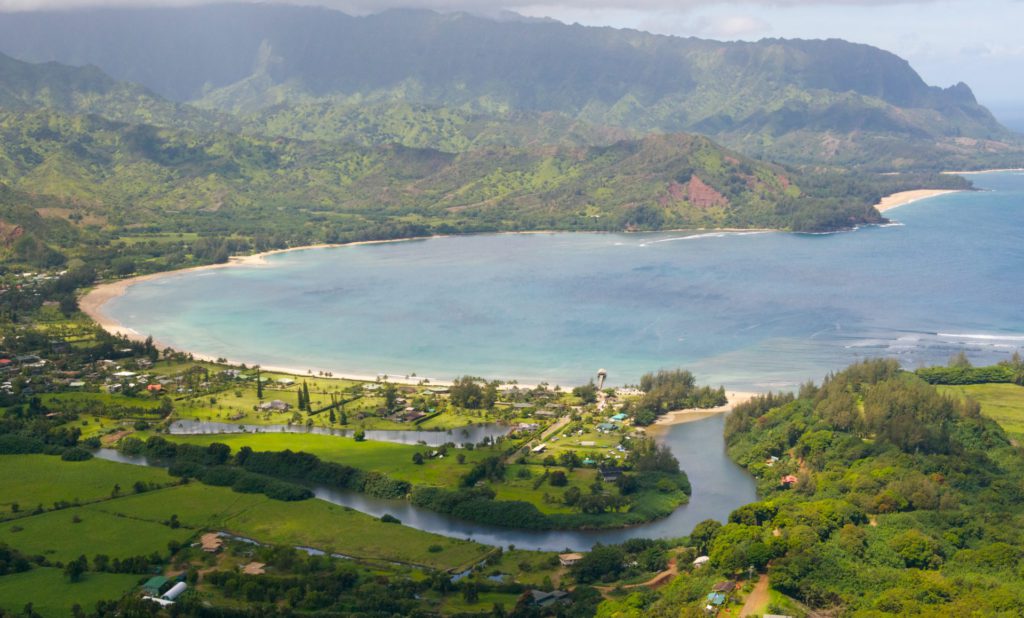 After Hanalei, you ascend the road to a turnout overlooking Lumaha‘i Beach (if the vegetation next to the turnout is not overgrown). This is a fantastic-looking beach made famous when Mitzi Gaynor washed that man right out of her hair in the classic Kaua‘i-made movie South Pacific in 1957. (If you haven’t seen the movie, that last statement must sound awfully stupid.) The eastern portion is the best but requires a hike down. Otherwise, you can walk right onto it just before the Lumaha‘i Stream. 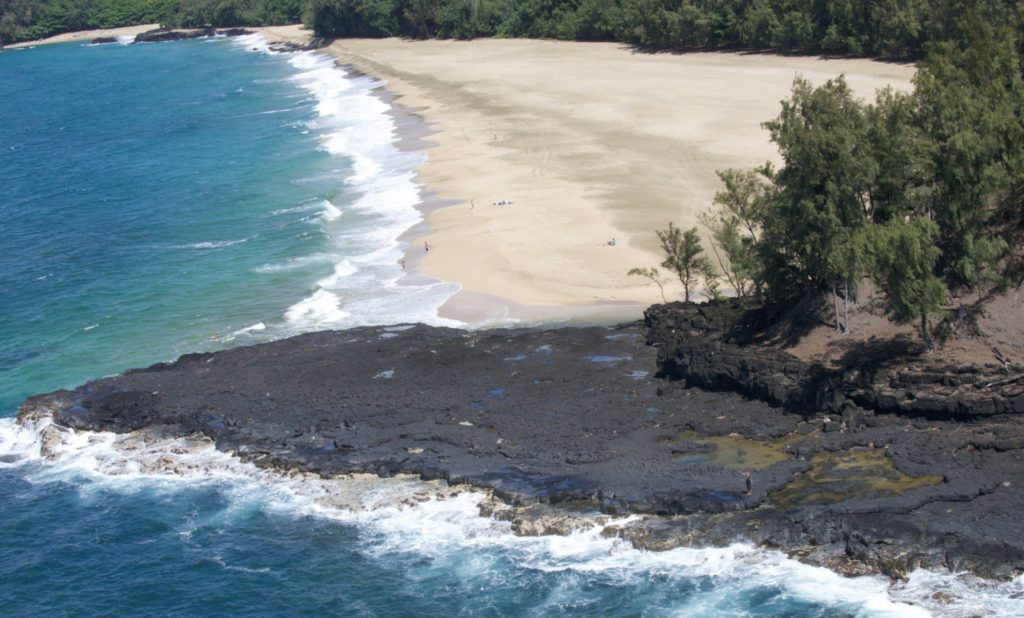 Everything looks incredibly lush from here on. This part of the island gets the perfect amount of rain and sunshine, making anything green very happy. Plus, some of the island’s most amazing beaches are found here. 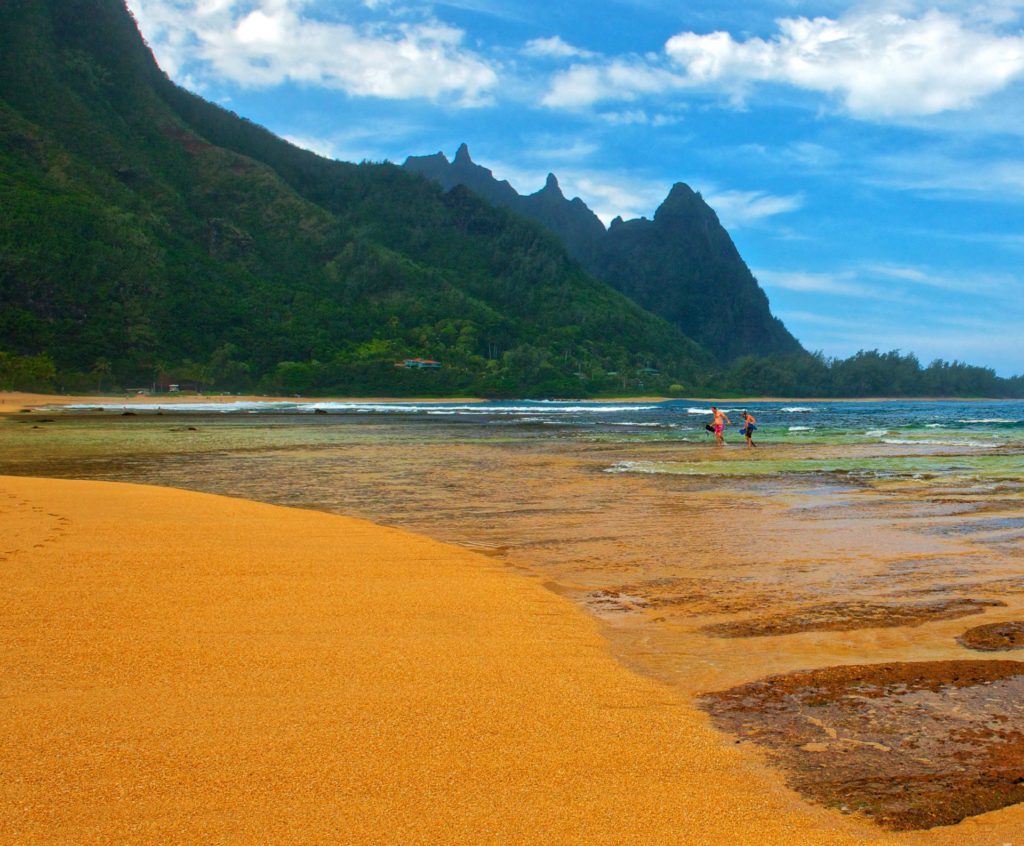 One of the best snorkel and shore SCUBA spots on the island is Tunnels Beach. This superb beach has a wide-fringing reef that is so large it can be seen from space. The beach is quite popular, and you will often see SCUBA divers here, as well as surfers and windsurfers. All this makes it sound crowded, but a lack of street parking keeps the numbers relatively low. The kaleidoscope of underwater life is usually profuse and definitely worth your time to explore. This is the same spot that the world renowned surfer, Bethany Hamilton, lost her arm to a tiger shark in 2003. Her story got the Hollywood treatment in the film Soul Surfer. Don’t let this deter you from seeing this amazing beach.

The last beach is as far as you can go on the north shore (by car). The beach here is called Ke‘e (also called Ha‘ena State Park), and it’s a swimming, snorkeling and sunbathing favorite that can get crowded. The sand volume here varies tremendously. Some summers the sand fills the lagoon, creating a knee-deep sand swimming pool. During these times on flat calm days the snorkeling just outside the reef is unreal. Tons of fish, clear water and so many turtles you’ll lose count as you cruise out the reef opening on the left side and head right. But calm seas are the only time you should consider leaving the lagoon. During winter months and at other times, large waves may wash over the reef, creating an excess of lagoon water. During these times the beach usually closed to swimming. 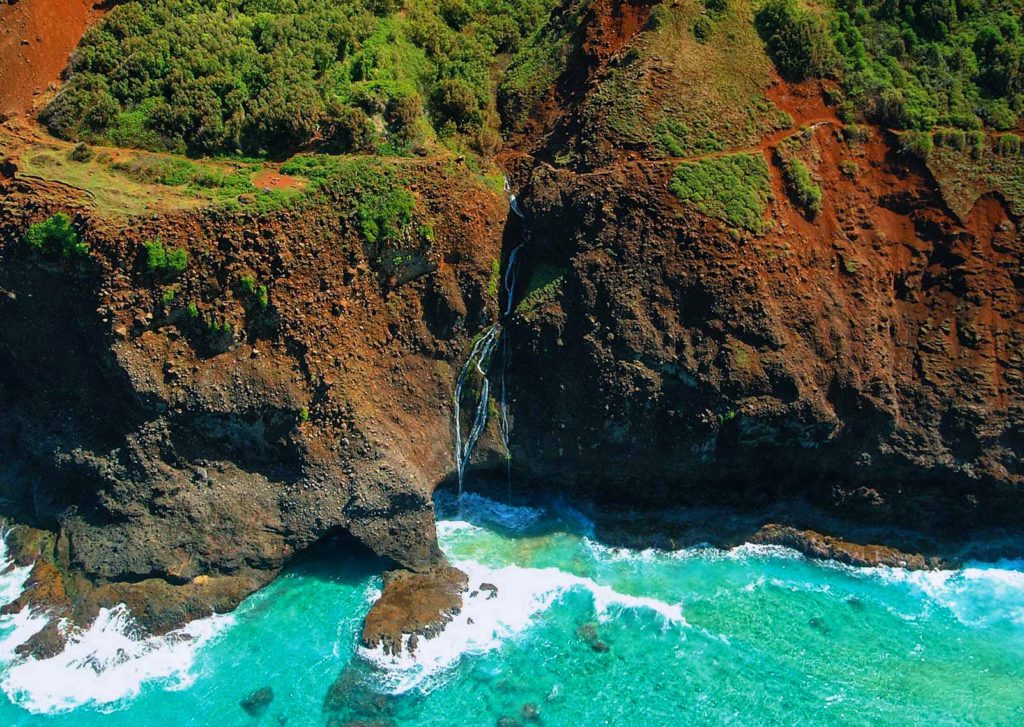 To complete the journey along Kaua‘i’s north shore, you ‘ll have to hike the Kalalau Trail. The ultimate hike is also the most famous hike in all Hawai‘i—11 miles of switchbacks, hills and beautiful scenery. Much of the trail is narrow and not without hazards—hiking boots or at least closed-toe trail shoes are recommended. Our guidebook and app can show you the way to get there and provides all the tips, updates and detailed maps you’ll need to confidently explore this bucket list trail.

There’s a reason the north shore of Kaua‘i holds a special place in the hearts of millions of people. It’s a paradise within a paradise. It offers a little bit of everything that makes Hawai‘i the dream vacation spot that it is—gorgeous beaches, verdant jungle, quaint surfing towns and luxury resorts. Even tragedies in the form of floods (2019), hurricanes (1992) or tsunamis (1946) haven’t been able to smudge the beauty of this place or the aloha spirit of its people. Do yourself a favor and make Kaua‘i your next tropical destination—we look forward to revealing what you’ve read here and more.