As much as ocean safety is discussed on Hawai’i, a lot of warnings center around watching out for high surf, rip currents and strong shore break. Many people who visit have very little experience with the ocean and those that do aren’t used to ocean conditions on islands in the Pacific. Some places seem to always have big waves and strong currents, so how can you tell when conditions really are too rough? It takes years of experience to determine when the ocean is going to be at its best and worst, and even people that spend their entire lives on and near the ocean get surprised from time to time. We will go over a few things to look for when attempting an ocean-centered day in Hawai’i. This is by no means a comprehensive examination and the best thing to keep in mind is “If in doubt, don’t go out!” 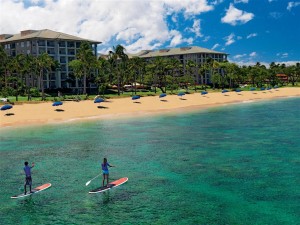 Conditions can change, from flat calm to rough in a matter of hours. Always evaluate what’s there right now before going out.

High surf warnings. High surf advisories. What do these things even mean? The National Weather Service issues a high surf advisory when “…breaking wave action poses a threat to life and property within the surf zone”. A high surf warning means that the threat is “heightened” (thanks for clearing that up, NOAA). These descriptions do well as a catch-all announcement that warns of dangerous conditions along the coasts. However, we have been out on countless occasions when high surf advisories have been issued yet the waves look like they do on any other day. Also, the opposite has been true of no advisories but the occasional monster wave comes ashore. There are many reasons for this to occur and having some understanding of how waves form and travel helps when determining if conditions are too dangerous. High surf can occur at any time of the year though winter brings the majority of large swells. In general, if there is a high surf advisory posted for your area, check out one of the many other activities not ocean related that your island has to offer. 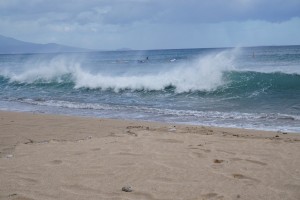 Waves can be deceiving. Even small waves can pack a punch. If your not sure about the conditions, then don’t go out.

As all surfers know, waves come in intervals, known as sets. The simplified answer as to why has to do with how wind gusts transfer energy across the ocean and how that energy is conserved in the waves as it travels. The timing of these sets can be all over the place (sometimes a set might come every 10 minutes and have 3 large waves, sometimes it may come every 4 minutes with 6 large waves, etc.). Taking time to observe these patterns is key to getting a better idea of what you will face in the ocean. Surfers wait to paddle out between the sets so as to actually have a chance of making it past where the waves break. Waves come in sets regardless of their size, though stormy conditions can turn those clean sets into a sloppy, choppy mess that no one with any sense would venture out in. It never fails to amaze us how far up the shore some waves manage to break. Even experienced locals get caught off guard by this and why the saying “never turn your back on the ocean” is so often repeated. Depending on what the underwater topography near the shore is, waves can do any number of things. They may break several yards offshore and send ankle-sized waves onto the beach, they may barrel straight into the beach like a freight train and knock down anything in their path. The steeper the incline of the shore, the more abruptly the waves are stopped, causing very powerful shore break. While some thrill seekers look for these strong shore breaks for boogie boarding and body surfing, don’t underestimate how powerful the waves are and how hard the sand is. Several beaches across the state have earned a bad reputation for the number of spinal injuries that occur due to the strong shore break and uninformed beachgoers (some uninformed, some foolhardy). Across the world there are many types of natural barriers that protect coastlines from this kind of heavy surf. Sandbars, barrier islands and coral reefs are some of the most recognizable. Hawai’i is blessed with wide, fringing coral reefs along some shores which provide protection from all but the largest waves. These beaches are often calm during any time of the year though visibility within them can be poor when large swells haven’t replenished the water. Beaches protected in this way from waves will often have another hazard that is more subtle. Rip currents. 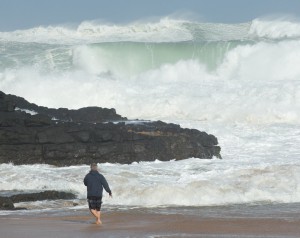 Sometimes its just a good idea to stay near the pool.

Rip currents form when water that has been displaced in one way or another (i.e. waves, tides, storm surges) returns to deeper waters through a channel. If you look at aerial photos of beaches, or even satellite images, you will often see what looks like cuts running from the shore toward the open ocean. This is the path of least resistance that water flows through back to the ocean. This channel is deeper than the surrounding ocean floor and generally sandy or smooth rock that has been worn over time. It can be difficult to spot a rip current as it is mostly happening just below the surface of the water (the undertow). It is best to be familiar with where the channel is and to avoid swimming near it. If the beach has a lifeguard, always ask about the conditions and what areas to avoid should a rip current form. If there is any handy, you can throw some driftwood into the water and watch where it goes. This will give you a general idea of where the water is flowing. Should you find yourself caught in a rip current and being pulled out to sea, never fight against it. The current is much stronger than you and you will only tire yourself out. Instead, swim parallel to the shoreline until you break away from the current’s hold, even if it is still carrying you away from shore. Once free, make your way back to shore, looking for the safest place to get onto dry land (avoid rocky areas, if at all possible). 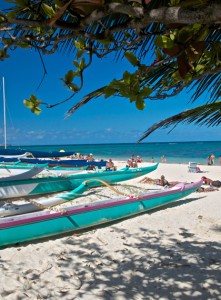 The practice of ocean canoeing still occurs to this day.

The ancient Polynesian navigators were probably the best seafarers the world has known. It is said they began their training when they were still young children, being placed in tide pools to sleep and become more in tune with the ebb and flow of the tides. When on the ocean, to determine how close an island may be, they would lay down in their voyaging canoes to feel the nuances of how the waves rolled past. Their very way of life was dependent on being able to understand the changing ocean conditions and knowing how best to react. The vast majority of us can only marvel at the knowledge, experience and expertise these people accumulated over a lifetime and handed down to the next generation. Instead, we use radar and various modern instruments to give us some idea of what to expect when venturing into the ocean. As helpful as our modern means of predicting ocean conditions are, they are no substitute for experience and common sense. If you lack experience, your instincts and common sense will be your best guide. If the ocean looks rough, despite no official warnings being issued, stop and watch the water. We understand that having precious little vacation time can make that advice seem unreasonable. Try to remember why it is you chose Hawai’i to visit. Taking the time to stop and take in everything, almost until you become part of the scenery itself, can be one of the most rewarding and memorable experiences of your trip. Watch what other people (if any) are doing in the water and how comfortable they appear. It shouldn’t take long to determine if the conditions are on par. Andrew Doughty is the famous author of the widely popular Hawaii Revealed series including Kauai Revealed, Oahu Revealed, Maui Revealed and the Big Island Revealed. He moved to Kauai many years ago after he fell in love with the beauty of the islands and decided to never go back. He is known for his candid opinion on each of Hawaii’s attractions, be it a restaurant, a helicopter ride, a beach or a resort. For the last two decades, he has managed to keep his identity anonymous so that his reviews can remain unbiased and only be influenced by his own opinions and thoughts. You can learn more about his beautiful journey at this link – About the author