Sometime around 70 million years ago a cataclysmic rupture occurred in the Earth’s mantle, deep below the crust. A hot spot of liquid rock blasted through the Pacific plate like a giant cutting torch, forcing magma to the surface off the coast of Russia, forming the Emperor Seamounts. As the tectonic plate moved slowly over this hot spot, this torch cut a long scar along with the plate, piling up mountains of rock, producing island after island.

The oldest of the Hawaiian islands to have survived is Kure. Once a massive island with its own unique eco-system, only its ghost remains in the form of a fringing coral reef, called an atoll.

Kaua‘i and Ni‘ihau are the oldest of the eight major islands. Lush and deeply eroded, the last of Kaua‘i’s fires died with its volcano a million years ago. O‘ahu, Moloka‘i, Lana‘i, Kaho‘olawe—their growing days are over as well. Maui is in its twilight days as a growing island.

After growing vigorously, Hawaiian volcanoes usually go to sleep for a million years or so before sputtering back to life for one last fling. Maui’s volcano Haleakala has entered its final stage and last erupted around 1790.

The latest and newest star in this island chain is Hawai‘i. Born less than a million years ago, this youngster is still vigorously growing. Though none of its five volcano mountains is considered truly dead, these days Mauna Loa and Kilauea are doing most of the work of making the Big Island bigger.

Here is a full Hawaii map showing all eight Hawaiian islands and their names. We already have several pages, guidebooks and an app dedicated to each of the four larger islands. This post will introduce you to Hawaii’s offshore islands.

No man is an island, or so they say. But in Hawai‘i, one family can own one. The island of Ni‘ihau is a dry, somewhat barren island of 46,000 acres located 17 miles to the west of Kaua‘i. When Scottish-born Eliza Sinclair was sailing in the islands with her family in 1863, they were looking for land on which to settle. Having turned down offers of several tracts on O‘ahu (including Waikiki, which they dismissed as showing no promise), they were about to leave for California when King Kamehameha V offered to sell them Ni‘ihau. When Eliza’s sons went to look at it, they found a green, wet island with abundant grass—perfect for raising cattle. What they were unaware of at the time was that Ni‘ihau had experienced a rare rainy period and was flourishing as a result. They offered $6,000, the king countered with $10,000, and they took it.

When the Sinclairs discovered that the land was actually dry and barren, unsuitable for a cattle ranch at that time, they arranged to buy 21,000 acres of West Kaua‘i. (They would continue to buy land on Kaua‘i, eventually acquiring 51,000 acres of the island, which they own to this day.) If you take a helicopter ride, you may see their fabulous estate nestled high in the mountains near Olokele.

Today, about 130 Hawaiians live on Ni‘ihau. Most use bicycles for short trips on the unpaved roads, horses for trips more than a few miles and trucks for longer journeys. No telephones, except for a wireless two-way to Kaua‘i, no broadcast tv and no Internet, by order of the Robinsons—the descendants of Eliza Sinclair. Intermittent power is supplied by generator and solar.

For an off-island helicopter experience, Ni‘ihau Helicopters, owned by the powerful Robinson family, flies groups to their privately owned island of Ni‘ihau. For $440 you fly for 1-hour, circumnavigating Ni‘ihau from a thrillingly low altitude, and land at one of its beaches for snorkeling, beachcombing and a picnic.

If you are determined to take the flight, contact them as much in advance as possible to maximize the chance that they can organize a flight, but don’t be surprised if it doesn’t work out. Less than a thousand people a year get to visit this place. Count yourself special if you’re one of them. Tours depart from Port Allen Airport on Kaua‘i’s west side.

Since this island is in the rain shadow of Kaua‘i, there are no permanent streams on the island (and consequently, no run-off). So visibility is often well over a hundred feet. This is some of the most exciting diving in the state.

The waters are rich in critters, arches, caves and pelagics. There’s a good chance you will share the water with sharks, so be prepared. The dive requires a 70-mile round trip (if you leave from Port Allen) boat ride and involves drop-offs, currents and sometimes rough seas. This is not for the inexperienced diver. Dives are usually deeper here and often drift dives.

If you’re staying in Kihei, Kaho‘olawe is the impressive island offshore behind the tiny crescent islet of Molokini. Though it looks enticing from afar, Kaho‘olawe is an ecological mess.

History revisionists (most of whom have almost certainly never visited Kaho‘olawe) attribute Kaho‘olawe’s ecological woes to either the military or western man in general. The truth can be a little more embarrassing.

When the ancient Hawaiians discovered these islands, they found on Kaho‘olawe a fragile dryland forest. It was a marginal environment to live in due to its location in the rain shadow of Maui. Dry, thin soil populated by hearty but water-starved trees and shrubs marked the windswept island. In the course of their settlement, the Hawaiians cut down most of the trees on the island to make canoes, for firewood and other purposes. Without roots to hold the soil together, erosion became the thief that stole the essence of Kaho‘olawe.

The result today is an island robbed of topsoil in many places, leaving nothing but an unforgiving hardpan layer. The areas that still harbor plants feature mostly gray shrubs and grasses. There is no permanent source of water other than wells. But despite that, there is a stark beauty to the place. It looks nothing like the rest of Hawai‘i.

But don’t count on booking your Kaho‘olawe vacation anytime soon. The island was transferred to native Hawaiian control in 1994. They are trying to replant native species and increase the amount of soil. It’s a hot, tiring job, but it’s hoped that future generations will find a Kaho‘olawe that is much like what was found long-ago on the Hawaiian islands.

For most of the 20th century Lana‘i was known as the pineapple island. Almost 98 percent of the island was owned by Dole Pineapple, and pineapple dominated this 140.5-square-mile island.

In the late ’80s the owners decided that owning a secluded Hawaiian island was more valuable than owning pineapple fields. So they got out of pineapple and began marketing Lana‘i as the “private island,” complete with two high-end resorts and excellent golfing.

Lana‘i is an amazingly relaxing place to stay. The second day into our first visit, we were tempted to call the front desk and complain that someone had broken into our room and surgically removed our bones. You can actually feel motivation and ambition draining from your body.

At the north end of the island you’ll find miles of empty beaches and a shipwreck off to the left. (There’s another wreck to the west, but it’s hard to access.) Driving eastbound along the northern coast you eventually come to the old Club Lana‘i and the nearby sugar mill, an abandoned day trip location for sailing trips from Maui.

Taking the Expeditions Maui–Lana‘i Ferry for $30 each way is the most popular way to get there. (Sit on the right/starboard side going over.) There are also flights into the airport on Hawaiian Airlines and Mokulele Airlines.

Check out the Where to Stay section of the Hawaii Revealed app for reviews of the Four Seasons at Manele Bay, Four Seasons Lodge at Ko‘ele and Hotel Lana‘i. All resort reviews are in the free section of the app, so it won’t cost you a penny. (Which is more than we can say for what your hotel stay will set you back on Lana‘i.)

Moloka‘i is a long, skinny island of immense beauty and unimaginable sea cliffs. It’s 260 square miles, though it was once much larger. The island owes its shape to the type of cataclysmic event that sometimes occurs with Hawaiian volcanoes.

Much of the volcano from east Moloka‘i broke off and fell into the sea hundreds of thousands of years ago, where half-mile-sized chunks of rock rolled to a stop 100 miles away. The landslide created awesome sea cliffs up to 3,000 feet high—the highest in the world—which are continually undercut by the ocean’s waves.

In the past you could get to Moloka‘i by ferry, but today you’ll have to fly. Mokulele Airlines, Makani Kai Air and Hawaiian fly to the main Moloka‘i airport from Maui. Package deals that include round trip flights and tours of either the topside or Kalaupapapa’s former leprosy settlement are available through Kalaupapa Day Tours. 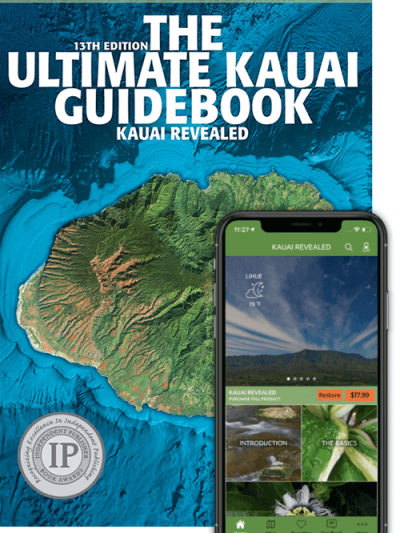 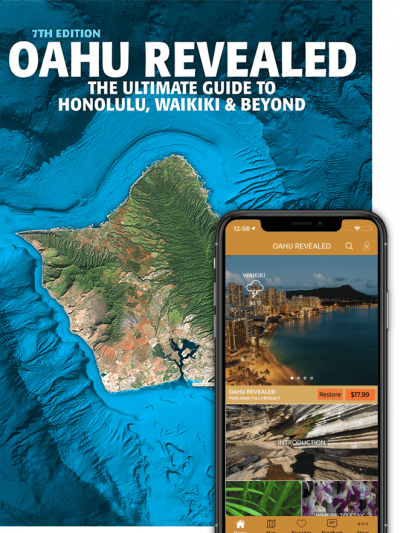 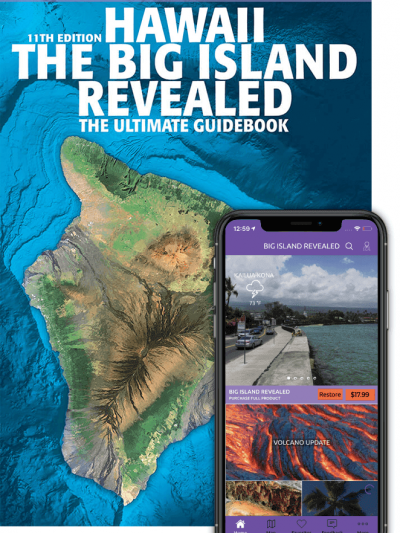 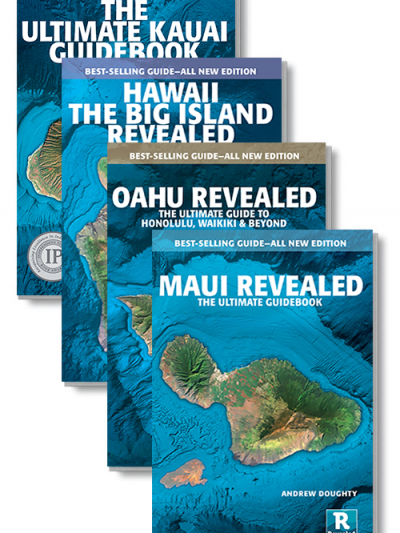