Read about Hawaii while you drink like you’re in Hawaii.

We have guide books and apps for Oahu, Maui, Kauai and the Big Island.

Find out where to get the best mai tais (besides your own), which hikes are must-dos and so so much more.

Go to any one of your friends and ask them what drink reminds them of Hawai‘i and eight out of ten will say the mai tai. Popular cultural says that the drink was created by a restaurateur named Victor J. Bergeron—better known as Trader Vic. A competitor of Bergeron, Donn Beach of Don the Beachcomber fame, claimed to have invented it earlier, but most mai tai scholars agree that Trader Vic was the originator. The name is reputed to have been coined when Trader Vic gave some friends visiting from Tahiti the newly invented cocktail and they exclaimed after trying it “Vic, this is Maita‘i!”, the Tahitian word for good. After the success of his restaurant in California, Bergeron brought the franchise, and the mai tai, to Hawai‘i in 1951. It didn’t take long for the drink to spread across the island chain like wildfire, even getting an appearance in Elvis Presley’s movie Blue Hawaii (the other drink most often associated with Hawai‘i). Visitors and locals alike love the fruity, but not overly sweet, flavor that effectively hides the taste of the large amount of booze that goes into it. We want to emphasize—there is a large amount of booze in this cocktail. Note the dark rum floater at the top of the drink. This gives the mai tai its distinctive look but is only for admiring when it is first served—you should stir it up before taking a sip. 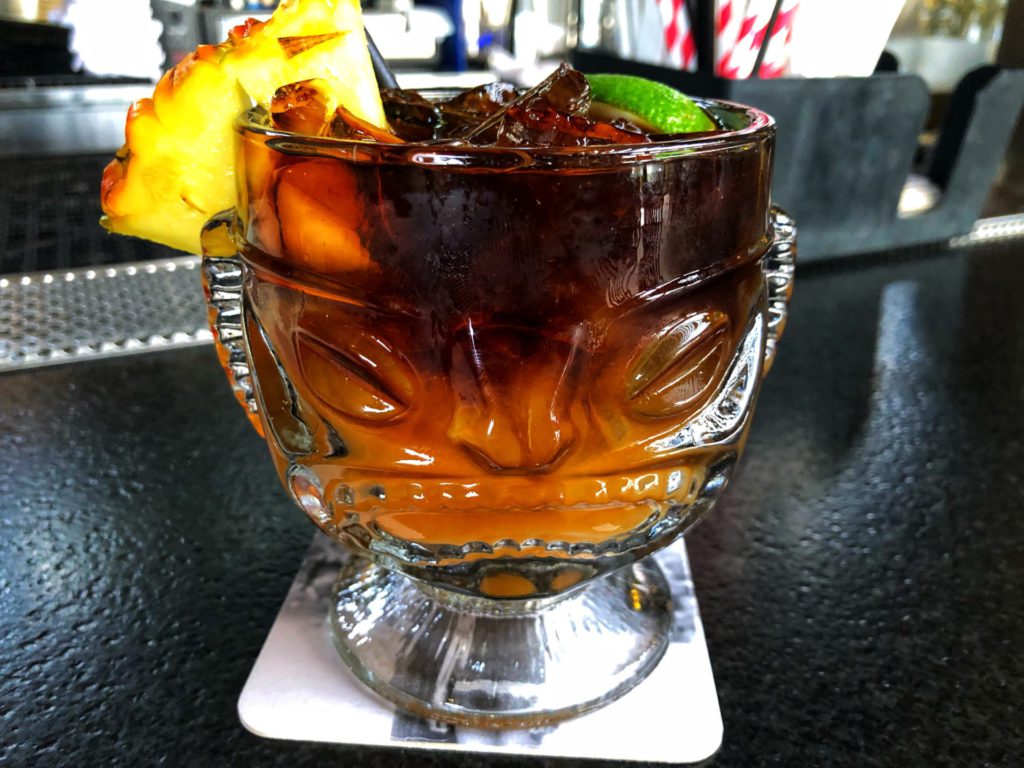 The mai tai at Duke’s Restaurants is one of the better options when visiting the islands.

With over 20 years’ experience writing guides for Hawaii, you can probably imagine how many different times I’ve been “forced“ to try this beverage. (Literally thousands.) Over the years I have become an unabashed lover and connoisseur of the cocktail, and in my endless quest to discover and report to you the best in the state, I have selflessly tasted them at almost every restaurant, bar and lu‘au I have ever visited and reviewed. So it should come as no surprise that I decided to try my hand at concocting the perfect mai tai at home. I came close—only a now-closed joint on Maui called the Mai Tai Bar eclipsed my mai tai recipe. Now that I have decided to share this recipe with the world, it seemed appropriate to also share the story of how I, and a bunch of maniacs, spent a night trying to develop the it.  Personally, I think we succeeded but you can be the judge of that. 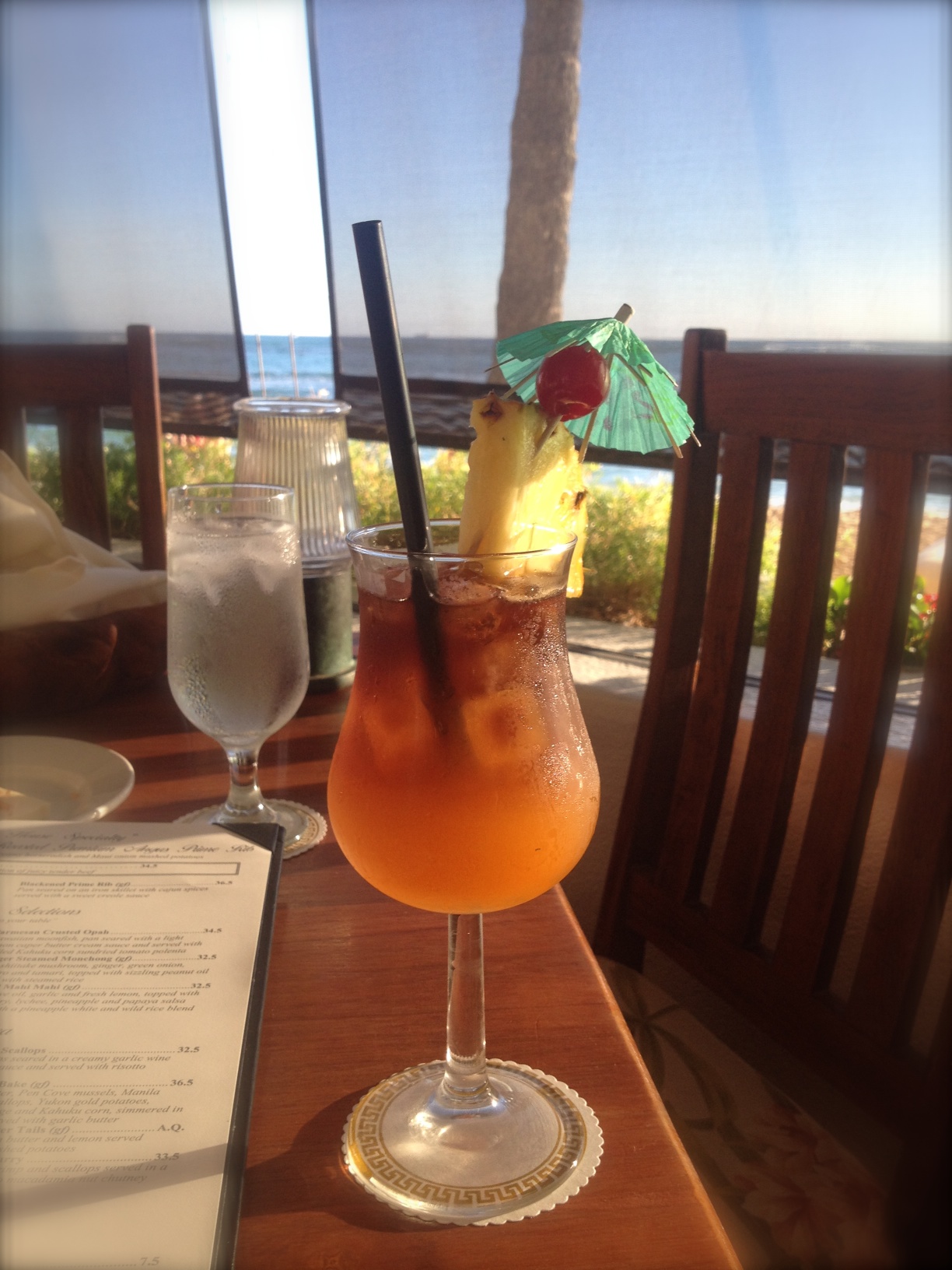 Don’t forget the pineapple slice, cherry and most importantly the umbrella!

For years, at every location I reviewed, I would ask how every mai tai I sampled had been made. Most of the bartenders were kind enough to give me their recipe, so I started comparing recipes, making mental notes as to the specific ingredients, what I liked and didn’t like, generally comparing different ideas. After several years of inching closer, there came the notorious day where I wanted to hammer out a recipe of my own.  The perfect mai tai. I called some of my most degenerate friends. Yeah, I’m talking about you George (who now works for me at Hawai’i Revealed), Gerry, Loni, Lenny and maybe Howie—it’s kind of a blur.  I asked them to come over for a formal tasting event, and I went out and bought a ton of rums, liqueurs and flavors and placed them all on the bar.  It looked like some kind of laboratory experiment—like we were preparing to cure some rare disease rather than make a drink. I was very scientific about it, with small glasses for tasting, measuring cups and spoons for portions. I also kept notes, listing the ingredients, amounts and the opinions of the various tasters as we finished each attempt. Well, though the samples were small, there were lots and lots of attempts. So many, in fact, that toward the end…well heck, all of them were getting pretty tasty because we were all getting pretty tipsy (absolute understatement). I called my wife, who was off-island at the time, and told her that I had finally made the perfect mai tai, and after she heard the sound of my voice, she suggested I wait until tomorrow and check it again, fearing that our judgement was being impaired by the level of enthusiasm with which we had attacked the samples. I should have listened to her. 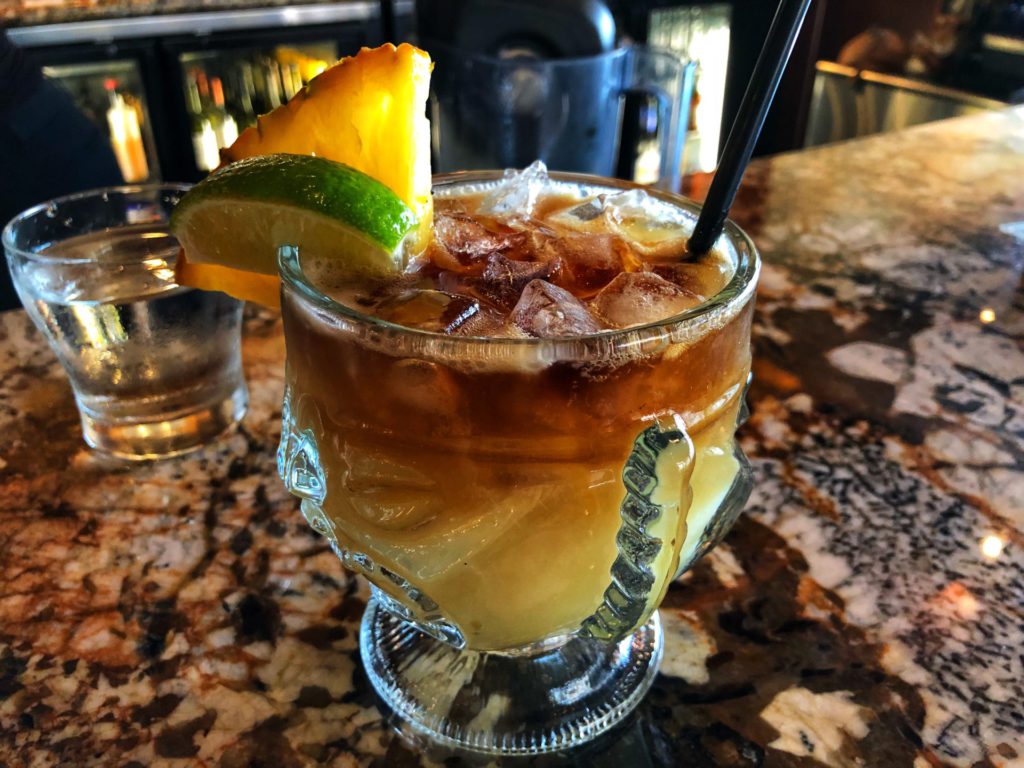 Some recipes may use a larger portion of juice, such as this one from Pita Paradise.

For some reason, that I can’t remember, we all slowly migrated into the garage where I had an electric engine hoist bolted to the ceiling. You know the kind that has a hook on the end and a box with two buttons that either lifts or lowers what is hooked to it? Well, we were out there laughing and having a good ole time, when, for reasons that escape me now, someone suggested that they hook up the hoist to my belt and we could all watch me fly. I resisted at first, because I was wearing my best Tommy Bahama shorts and noted that fact to the would-be hoister. “Hey, these are $40 shorts. I’m not gonna risk them,” I declared. Well, the would-be-hoister, George, pledged to pay for the shorts if the belt loops failed and for some reason—well, I guess we know the reasons, marked by dozens of empty sample glasses—this now sounded like a great idea to me. I agreed to allow the experimental flight to take place as long as the cost of the shorts was covered. I was like a engine-hoisted Charles Lindbergh.  So on my belt went the hook, and the hoister then pushed the button and up I went. I guess in my mind I thought I would gracefully rise up above the garage floor and float like a bird, amazing everyone with my grace and ability. I mean how could I not? 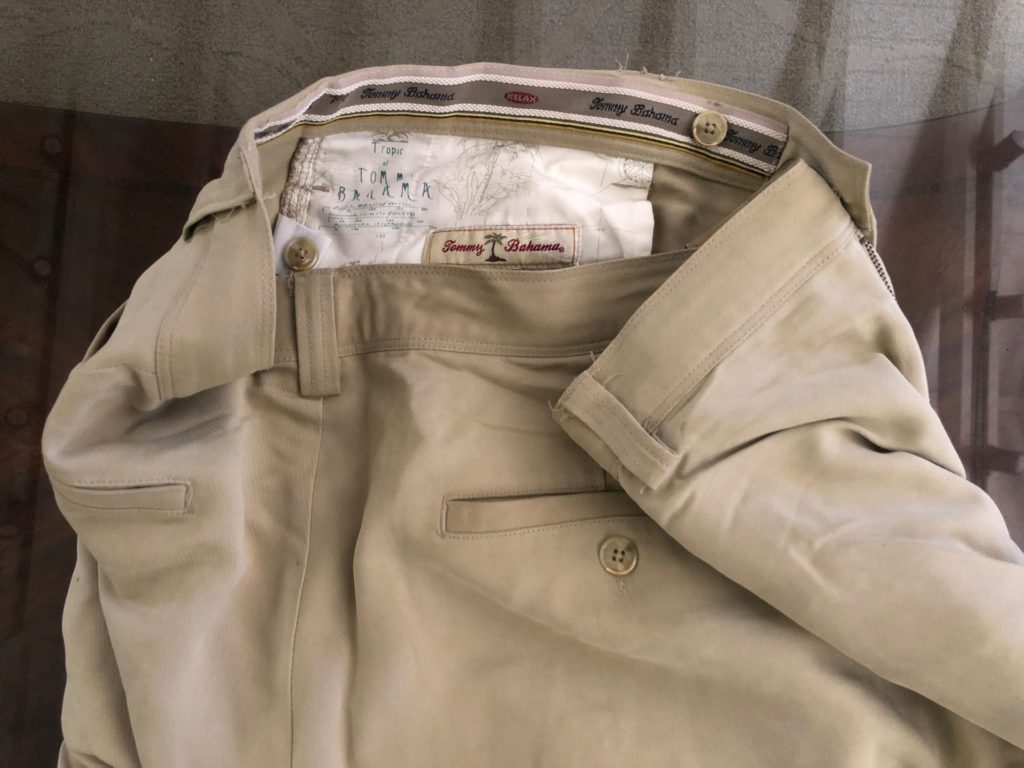 Not the shorts, but similar.

Now, until that moment, it never really occurred to me how my weight was distributed.  I never had a reason to even ponder that question. But, as I slowly lifted off the floor I discovered an interesting fact. I weighed far more above the waist than below it. That little tidbit would have been handy to have considered before the hoist went up. Because as soon as it went up, everything above my waist immediately attempted to replace my feet on the ground and I swung upside-down in a flash. So there I was, dangling and wiggling like a fish on a hook just hauled out of the water, with my head just missing the floor as I swung downward. I remember my so-called-friends, howling with laughter as I hung there upside down. I, on the other hand, realized the predicament I was in. As I tried in vain to regain my equilibrium, I proceeded to hurl threats and insults, howling in rage at the one holding the control box—and my fate—in his hands. And then it happened. I felt the loops holding my belt start to give, and with a sickening ripping sound I realized I had only seconds before the pants would give and I would hit the ground head first.  As you can probably imagine, the threats and insults became more targeted and started to include threats of torture against his family, his pet and even his distance relatives. All the while howls of laughter surrounded me as I waved arms and legs trying in vain to return to a state of grace.  Eventually the threats, directed at him, his family, and future generations, got through the laughter, and he lowered me back to the ground. I was back on terra firma with a very red face and a set of now useless Tommy Bahama shorts. I unhooked the hook, grabbed the 40 bucks, and proceeded to make another round. After that experience, I needed one. And that is how I came up with my very own recipe for a mai tai. 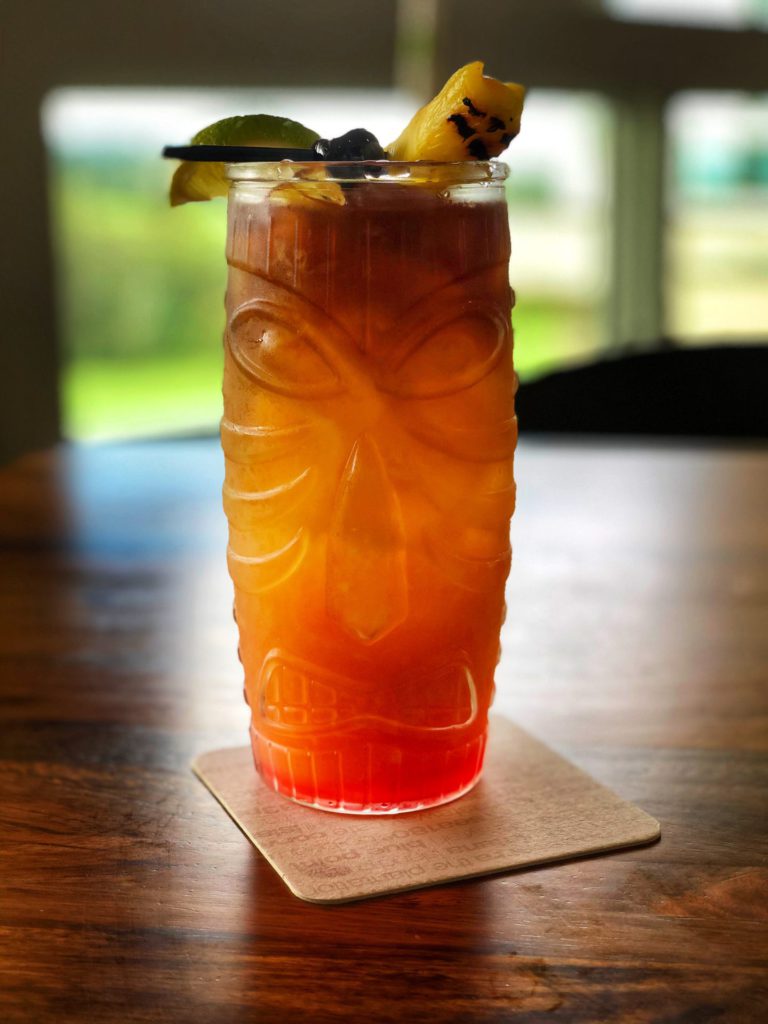 Everyone has a slightly different recipe. Notice the grilled pineapple used at Maui’s Plantation House Restaurant.

Now before I jump into the recipe, I should mention a few things.  First there are couple of ingredients you’re going to need to get. If you are familiar with the drink, then you probably already know you’ll need a couple of different kinds of rum. We use three, a white, a dark, and a coconut flavored—remember when we said there was a lot of booze involved? For this blog we are featuring Koloa Rum—they were kind enough to donate to the cause. Having good rum is important, but having great rum is not. Because the drink conceals most of the flavor, you don’t need to go out and buy the single barrel, 4-year aged rum at $95.00 a bottle, but since they donated that too…. 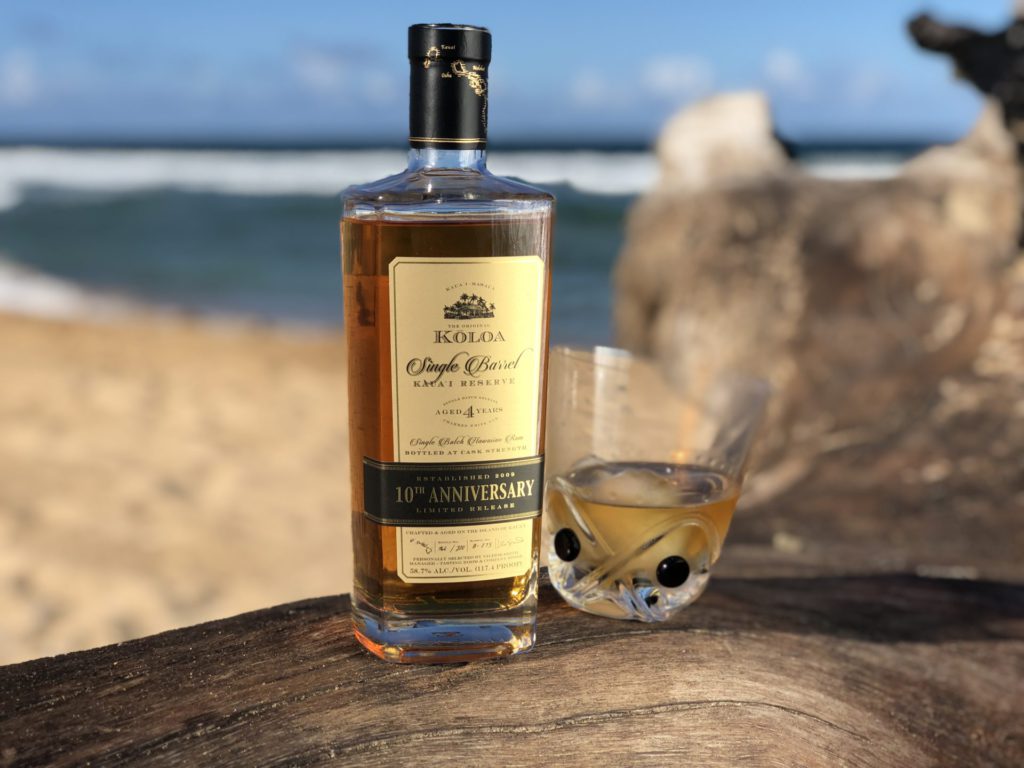 Top shelf rum is nice, but not necessary for making a mai tai.

For me, a good decent bottle of something we will use in other drinks—if there are other drinks— works fine. Other ingredients are easy to pick up, except one—POG.  An acronym for Passion-Orange-Guava, this local favorite, is the real star of the show. In Hawaii you can get it from any market, but on the mainland it’s a little harder to find.  You might even have to do a little concocting by buying the Passion Guava juice and then adding the orange, but without it, a mai tai is just a lot of rum with pineapple juice. I’ve included some links in the recipe that might help. Well, I think that about does it, so without further ado, I present to you:

I made the amounts in parts so you can use either shots (for glasses) or cups (for pitchers). If you get the ratio right, then the results should be the same.

1½ part POG (passion-orange-guava juice). This can be ordered by the can online if you can’t find it locally.

Mix all of the ingredients together, except the dark rum, that you just float on top with Koloa dark rum. ½ part is typical, or use 1 part for more…seasoning.

Enjoying the fruits of Hawai‘i goes beyond mai tais (and thats a bold statement from us!) Farm tours, beaches, jungle hikes, waterfalls and more await. Pick up our believable guides and start planning an unbelievable vacation.