Andrew Doughty2020-09-24T09:29:46-10:00
So much of the romanticized idea of Hawaiian paradise can be summed up in one word: aloha.  Those five little letters can conjure up images of tropical sunsets, sparkling beaches and hula dancers in the imaginations of people the world over.  Aloha has a variety of meanings and like most words and language, it has evolved over time.  The base meaning of the word is peace, affection, compassion and mercy which carries over into the greater Hawaiian ideology of the “Aloha Spirit”.  Using aloha as both a greeting and farewell seems to have its roots in the missionary period of the mid-1800s as there are other, distinct Hawaiian terms for “hello” and “goodbye”.  The late comedian George Carlin pointed out that using the same word for hello and goodbye might mean “if you spend enough time in the sun, you don’t know whether you’re coming or going!” which may bring more insight into the mindset of those white missionaries. 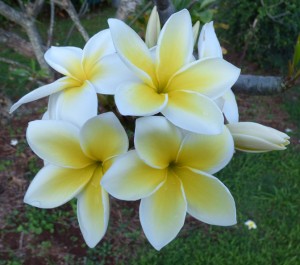 The beautiful and fragrant flower is made into the Leis that Hawaii is known for.