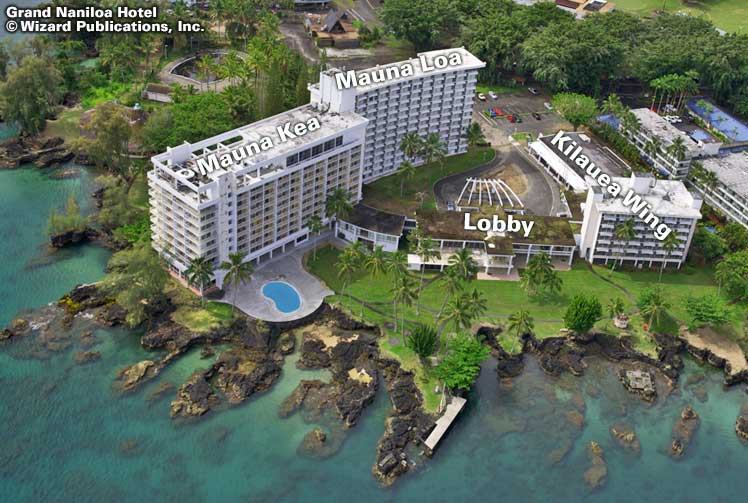 For quite some time we’ve had a note on this property: “This resort has gone under extensive renovations and is now part of the Hilton DoubleTree family. We will be re-reviewing it soon.” Although renovations at the Grand Naniloa have concluded (a mere $20 million later), we have a feeling that changes will keep coming, and we look forward to them with…curiosity.

Renovations have made the hotel clean, spacious and modern (though many things have not changed such as the bathrooms, for example) with a Hawaiian influence in the decorations (walls lined with Kim Taylor Reece artwork are exceptionally beautiful) and live music seven days a week. But they left the pool alone (though there are now pool and lounge chairs available). Although sometimes the combo of Hawaiian and modern seems to clash rather than flow (the lobby feels a little unnerving to us), in general, this hotel has undergone tremendous change for the better. They seem to be sending a message to the more popular resort areas that Hilo can fancy, too. (Yes, we’re using that as a verb.) Our crystal ball suspects they might even add a lu‘au soon (which would be the only one on this side of the island).

They are especially well-equipped for large groups or conferences with five meeting rooms available for 40–350 people.

There are three towers—Mauna Kea, Mauna Loa and Kilauea. (Volcano names you should be familiar with as you prepare to explore the island.) Now that renovations have been completed, all rooms are fairly uniform and have nice, clean areas. Some rooms have… interesting touches, such as tubs in the middle of the bedroom area that seem crafted more for the honeymooning couple rather than the traveling family. Some hallways give us vertigo (they’re skinny and next to huge windows that look straight down), but even in our nauseousness we were impressed with the view. This location really is the best in Hilo. Rooms (298–369 sq. ft.) vary depending on view and lanai, but run from $136–$259. Suites (550–742 sq. ft.) are $224–$295. Discounts and packages available.